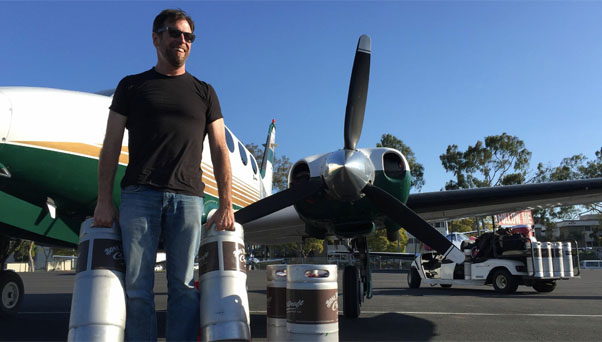 John Goerke, the founder, and CEO of Bona Fide Brewing is fascinating - just read the question about what others might find surprising about him! Not only is he an expert at all things coffee, he is a pilot and father of four! We hung out with John and his team for the first time over a sushi dinner during Expo West in 2015 and it was one of the funniest dinners I can remember. We made friends with half the restaurant and there is a picture from this night somewhere on the internet. Here is more on John with Bona Fide Nitro.

How long have you been commercially brewing coffee?

I started my first coffee business in 1986, and have been roasting, blending, and brewing coffee ever since. Two previous companies I have started and sold are still going strong.

If you had to pick a favorite flavor that you offer, what would it be?

I'm a big fan of the Bona Fide Draft Nitro Ethiopia Yirgacheffe. I consider it on par with a fine Cabernet or a really complex craft beer. It has a sophisticated flavor but a very balanced flavor profile. I've actually had dreams about it.

If you had to pick a favorite flavor of another brand, what would it be?

I like what Starbucks is brewing on tap. Their draft nitro on tap in their stores tastes really sweet and nutty. It doesn't have the stable shelf life that Bona Fide Nitro does, but it tastes really good when it is first poured.

If you had an extra hour in the day to spend any way you wanted, how would you spend it?

Where is the last place you went on vacation?

What is your favorite meal?

Do you have any pets?

What is your favorite part of running a business?

I like the "accepting the unknowing" part the most. I have a clear vision of what the end game looks like. However, the moment I actually accept the unchangeable and unfavorable terms that the universe delivers me in a given business situation is the part I like best. That's where the real learning happens, it's where the Zen is.

What is your least favorite part?

That dazed and confused second right before I realize that the universe just dealt me one of those really unfavorable and unchangeable kind of moments "I can't wait to get past that one!"

What is something about you that others might find surprising?

I grew up in a religious cult.

What charity or cause are you passionate about supporting and why?

The B612 Foundation is my favorite NGO. They are developing innovative technology to protect the earth from asteroid impacts. If I ever grow up I'm going to give them a lot of money. I like their cause, which is to quite literally save the world! Like me, they don't like to do easy things. https://b612foundation.org

Before you started Bona Fide, what were you doing?

Have you ever binge-watched a TV series and if so which one?

The last movie you saw in the theaters?

"The Public", at its world premiere at the Santa Barbara International film festival. My wife and I got to hang out with Alec Baldwin and his pregnant wife prior the show, and then randomly with Jack Canfield for a couple of hours after the show. I'd say it was the best movie experience to date!

The last concert you went to?

The Who, on their last US tour. My friend gave us tickets near the front row. Even though I'm not a huge fan, it was a cool show. Fun fact, my wife didn't even know who they were.

Anything else you want people who are reading to know about you?