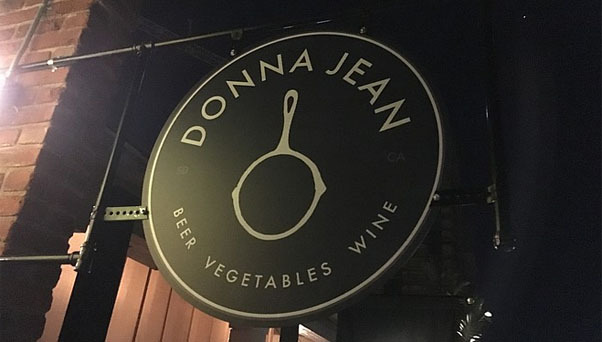 Donna Jean is San Diego's newest plant-based vegan restaurant and named in honor of the chef's mom. Chef Roy's mom died at the young age of 55 from aggressive breast cancer. Roy believes, "it absolutely could have been prevented if she would have been given the knowledge and resources to seek out a plant-based diet earlier in life." According to Donna Jean's website, "This gave him a passion to create something that would not only have made her proud but to introduce a form of plant-based cuisine that even the most stubborn meat-eaters can appreciate." The restaurant opened last week and is only open for dinner Wednesday through Sunday from 6 pm to 10 pm. Located right next to Evolution Fast Food and with some of the same owners involved, it also offers delicious vegan food but expects a more upscale version.

The cast-iron mac'n cheese came highly recommended. It did not disappoint. You'd hardly believe it's non-dairy. Roy brought the recipe to Donna Jean's menu from his previous job as head chef at the SunCafe in Studio City, Los Angeles. In fact, it was named "the best vegan mac and cheese ever" by the Huffington Post.

The Bourbon Chili was also really good and save room for dessert. The cobbler is amazing! Or if you are looking for more of a savory instead of sweet dessert, try the strawberries and shortbread.

Also, get one of their signature craft cocktails. It even comes with a stainless steel straw which makes for a chilled drinking experience.

Donna Jean is located at 2965 Fifth Ave in San Diego and we highly recommend checking it out. "This is not a health food restaurant. Our goal is to start a conversation about what plant-based cuisine can be and hopefully that will set the wheels in motion for a larger movement," writes the restaurant on its website.